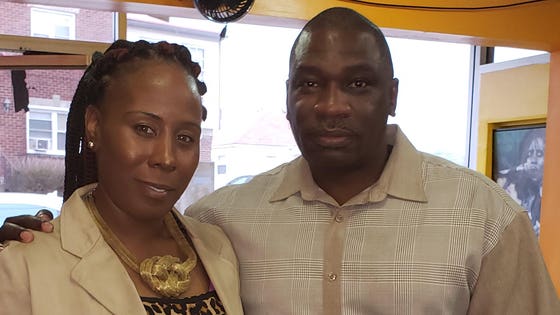 As any entrepreneur will tell you, starting a business is hard. Even the brands that look like overnight successes wouldn’t have succeeded without the grit, determination, or passion of their founders.

Kay Stewart knows this better than anyone. For almost two decades, Stewart hustled her way through life, starting several different businesses while holding down day jobs. In 2017, after asking for a raise and receiving an extra 50 cents per hour, Kay decided to turn her side gig into the main event: she opened House of Soul Catering, a Pittsburgh-based restaurant that supplies outstanding food to some of the city’s most elite hospitals and universities.

Kenny Gould: Can you tell me about yourself?

Kay Stewart: My name is Kamahlai Stewart, but I got by Kay because my name has been butchered for 38 years. I’m the owner of House of Soul, which is a small, local business in Pittsburgh that does a lot of catering and takeout.

KG: What type of food do you make?

KS: We’re a multifaceted restaurant. We do all types of food. We’re like a one stop shop for any type of cuisine. Anything you want, we can make it happen.

KG: Are you from Pittsburgh?

KS: My husband and I are originally from Washington, D.C. But I’ve been a Pittsburgher since I was 16. I went to the University of Pittsburgh and never left.

KG: And how’d you get into cooking?

KS: I actually started in the administrative world. I worked for the government for about six years. Then for eight years, I worked at a law firm in downtown Pittsburgh. And the whole time, I was catering from my home. My very first gig was for my girlfriend’s baby shower. She told me what she wanted. I surpassed that. I tapped into event planning and decorated the whole shebang. From there, it was like, “You need to get some business cards and do brochures.” I used to go floral networking events in my spare time. I’d drop off my flyers and menus and business cards. It became word of mouth, and then I registered through a company called EZ Cater.

KG: When did you go into cooking full time?

KS: In 2017, I asked for my boss for a raise. He gave me fifty cents. I resigned that May, renovated in June, and had my grand opening for House of Soul in July.

KG: You make it sound so easy! But surely more went into it than that?

KS: It was scary to jump out. I knew what my work was. But I have the tenacity to cook. It’s in my DNA. I’ve been cooking sine I was 7 years old. That’s who I am as a person. Unfortunately, it took many years to figure out that it was something I needed to do. Before my mother passed away, I remember her telling me, “You need to get paid for what you do. This cooking is you!” That played a major part in deciding to move forward full time with my business. Once I registered for my EIN, I was like, I’m getting ready to get out there and just do it.

KS: We had a good grand opening. As with any new business, if you don’t know how to push through and adapt, you’ll fail. A few months after we opened, it became very stressful. The demand was getting larger but the staff was getting shorter. Everyone we hired said they could cook, but then we found ourselves training everyone. At times, I definitely wanted to throw in the towel. But now I tell anybody, “Just push through the hard times.” If you can do that, you’ll survive.

KG: And how have things gone since?

KS: The catering has really taken off. We have a good rapport with the University of Pittsburgh Medical Center. We did some with Carnegie Mellon today. All next week, we’ll do Allegheny Hospital on the North Side. And we’re still a small, family owned business. My stepson works for us, as well as my sister. My husband has a 9-5 but he’s our technical guy. He changes lightbulbs, picks up our groceries.

KS: I’m a hustler. I’m from D.C. You can’t have one stream of income. You’ve got to have multiple streams to live a good life. I’ve been a licensed cosmetologist since 1997. I did the salon thing but that was something I didn’t want to make a living at. Thought my life, I’ve actually had two day cares and two salons. Then came House of Soul and this is the business I’m most passionate about. The other stuff, I was just working to stay in business. But this is the one.

KG: Where does your motivation comes from?

KS: I didn’t want my children to want for anything. Growing up, we were in a shelter. I wanted to be able to provide for my nieces a life I didn’t have. I had to think about their future, about my future. Those were my drives to keep me pushing. And hard work pays off.

KG: What is your favorite type of food to make?

KS: I’ve always been a constant learner. At 2:00 or 3:00 in the morning, I’m looking at videos on how to make different types of food. And then I’ll do my own little twist and make it mine. At House of Soul, we make Italian food. I know how to make pasta from scratch. The only thing we used canned in our business is green beans. Everything else is made from scratch. When people want burritos, I make that. I make chicken sandwiches that are crispier than the ones you’d get at Popeyes.

KG: What’s next for House of Soul?

KS: My dream is to open a full service, sit down restaurant. I have a two seater where a couple could come in, but mostly everyone orders their food and they’ll come in for takeout, or we’ll deliver. After that, I’d like to have my business franchised.

-Interview edited for clarity and brevity.

Is this the next great adventure hotspot?
Boeing is in talks to borrow $10 billion or more as 737 Max crisis wears on
10 British hotels with amazing breakfasts worth getting out of bed for
The best budget hotels in Los Angeles for A-list stays without the price tag
What it’s like to live in Amsterdam’s red-light district