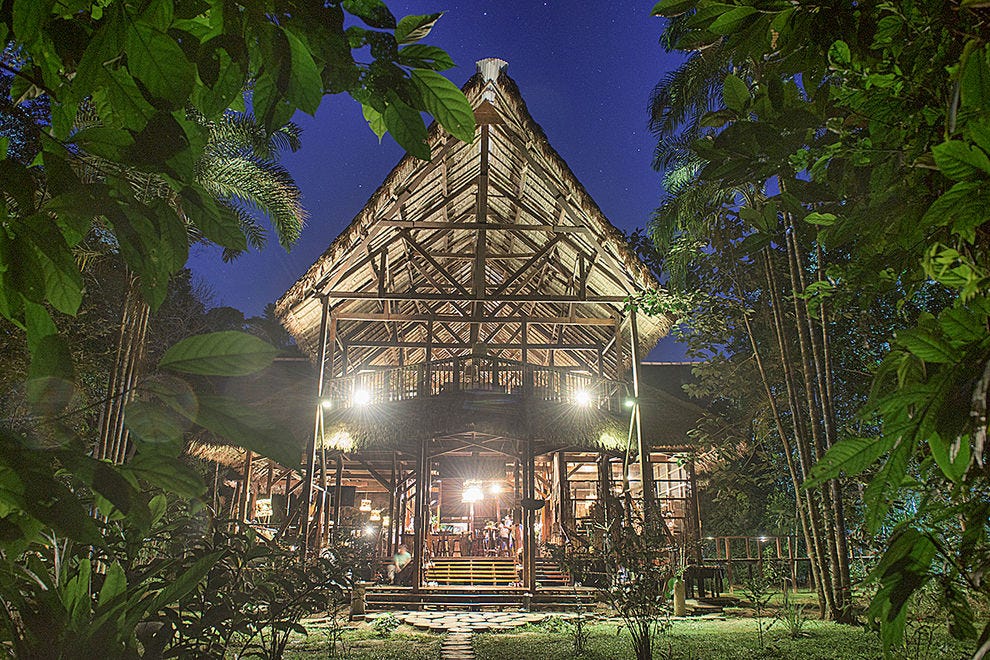 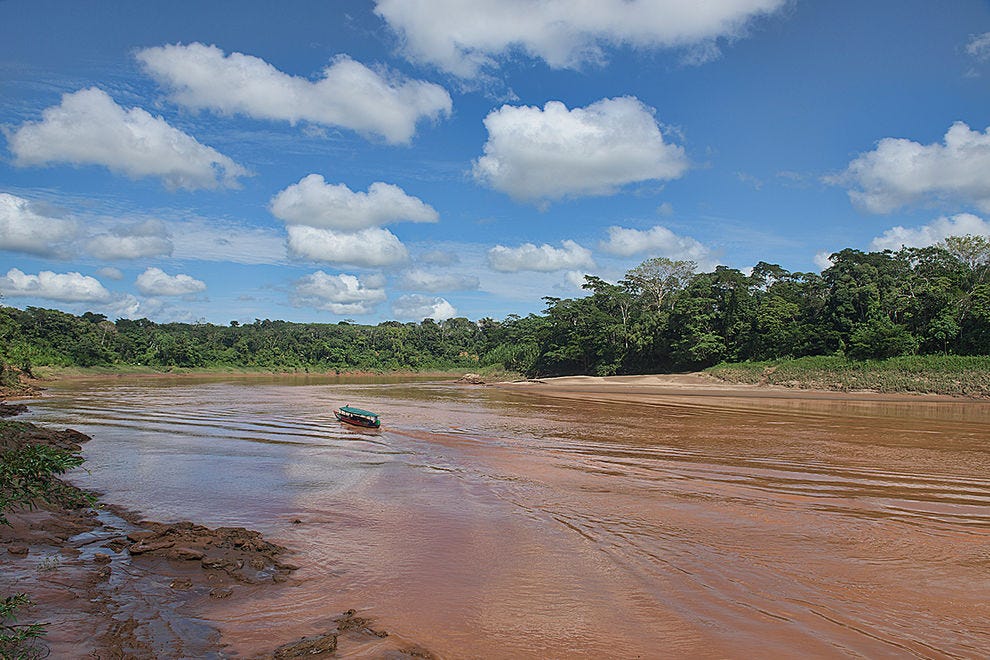 Home to over 1,000 square miles of protected wetlands, floodplains, rainforest and oxbow lakes, the Tambopata Reserve is one of the most biodiverse spots on the planet.

Access into this amazing area is by boat, and outfitter Rainforest Expeditions runs four outstanding lodges along the Tambopata River, with one of them being the only lodge permitted to operate right in the center of the protected reserve.

Within an hour of heading upriver, you’ll be spotting Amazon wildlife. Head a further hour into the heart of the reserve and you’ll be deep in the jungle, home to jaguars, caiman, macaws, puma, ocelot, parrots, piranha, giant river otters and much more. 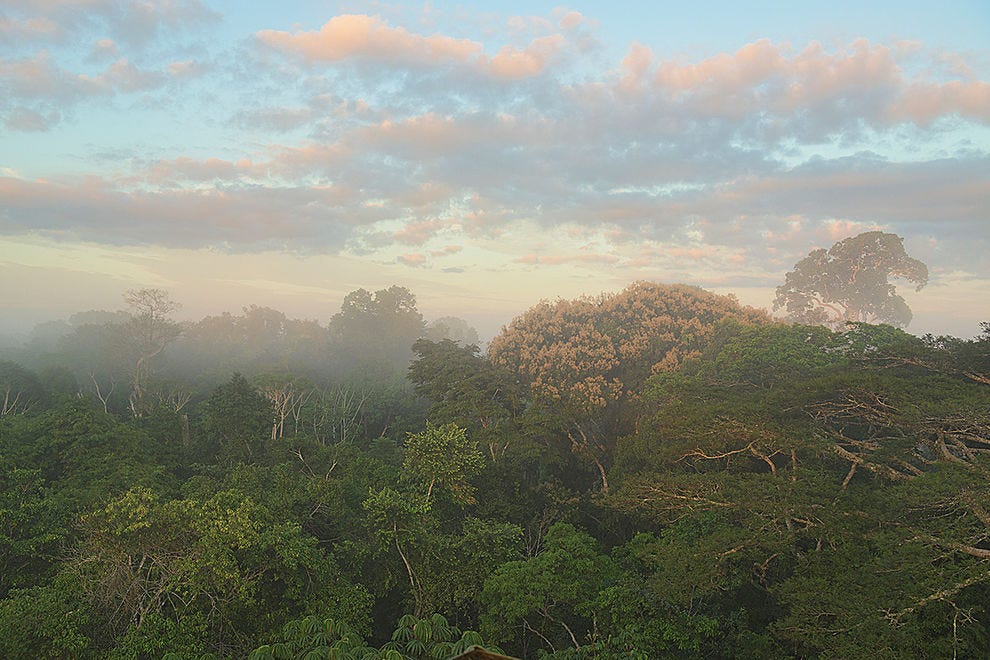 The Rainforest lodges combine the best of the river and the jungle. At the Refugio Amazonas, a family-friendly lodge with a wealth of activities going on throughout the day, you can climb a 100-foot canopy tower to get a bird’s-eye view of the thick jungle below, see toucans and macaws flying and watch the forest canopy rising above the jungle floor.

There are great views here of the Brazil nut trees. At up to 150 feet tall and living over 500 years, they’re some of the tallest and oldest trees in the Amazon. With the rainforest here being so thick, a canopy visit is not just a unique experience, but one of the best ways to see wildlife and the incredible surroundings.

You might be literally “way up river,” but at Refugio Amazonas, you don’t have to rough it. The lodge is built out of natural materials that blend in with the surroundings, and a large staff of expert guides take guests out on river and land excursions from the early dawn until the sun sets, and even do a few night hikes in order to try and spot nocturnal animals. 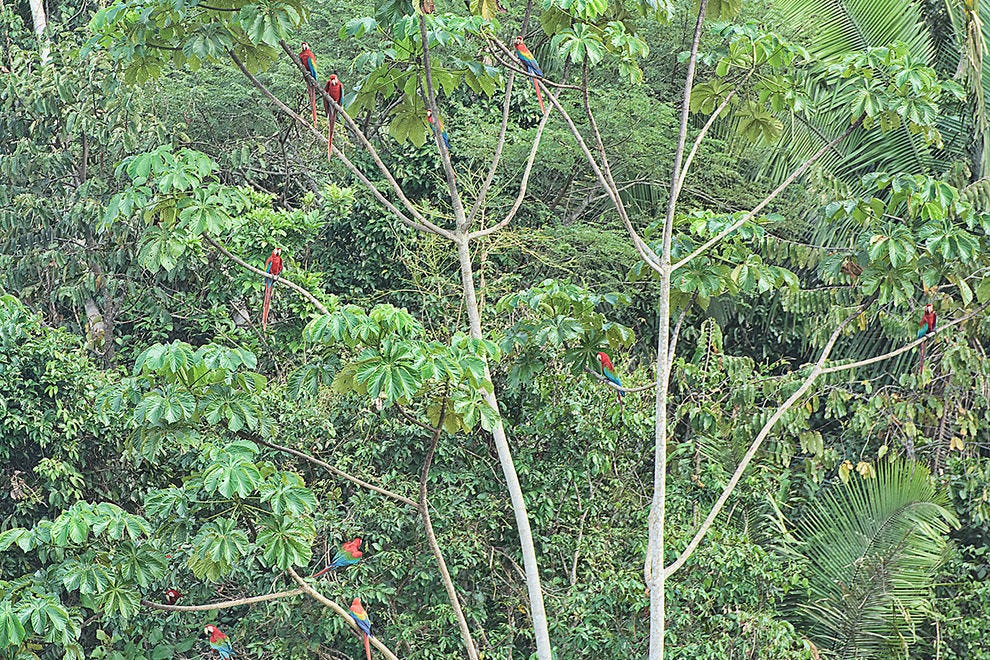 Scarlet macaws in the Tambopata Reserve

One of the highlights of visiting the Tambopata Reserve is the opportunity to see macaws in the wild. The birds can be seen at clay licks and in the trees, and are regular visitors to the Tambopata Research Center. It’s both a research station and eco-lodge where Rainforest Expeditions plays host to the Macaw Project, one of the world’s foremost studies on wild macaws.

Scarlet, red and green, and blue and yellow macaws are all frequent visitors to the site, and are seen flying overhead in the morning, then usually descending to the trees and clay licks as the day heats up. 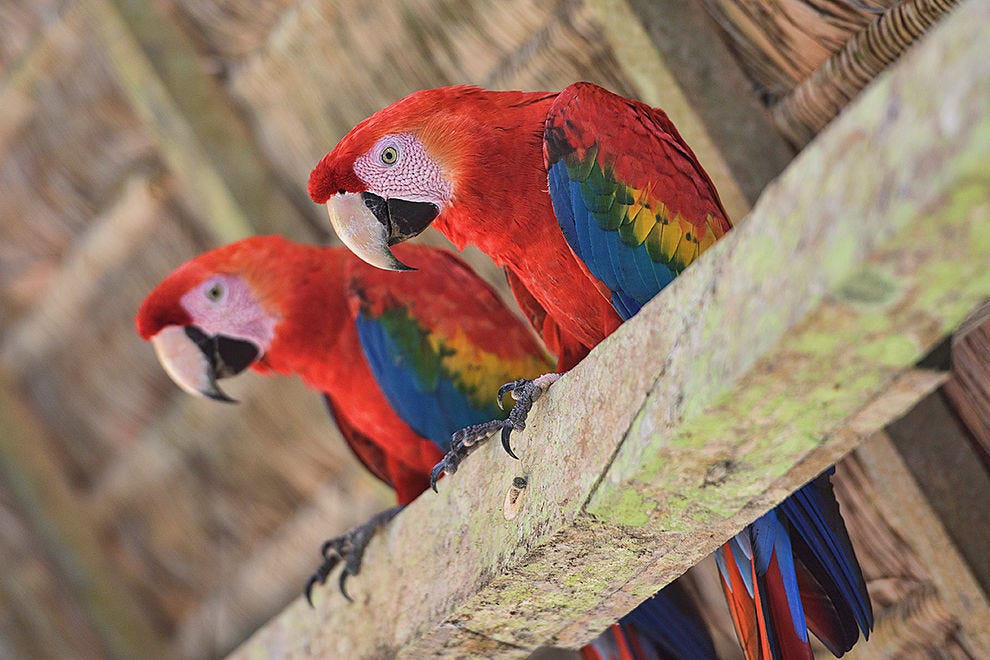 At Tambopata Research Center, you’ll even see wild macaws that have become used to visitors and researchers, with some of the longer-staying ones even flying into the dining room during meals, or perhaps even perching on wood beams in your room or through the hallways!

You’d be hard-pressed to get this close to these colorful and beautiful birds anywhere else in the region. 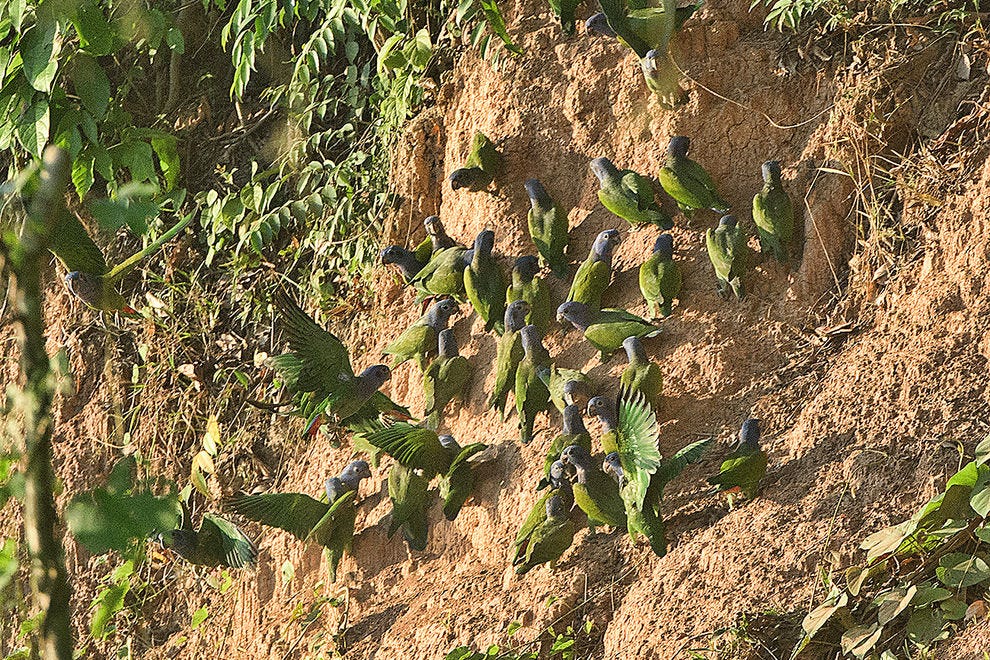 One of the major highlights of any journey along the Tambopata River is stopping in at one of the riverside clay licks, where flocks of parrots and other birds descend in the early morning to feed.

In one of the world’s most stunning natural spectacles, hundreds of blue-headed, mealy and other species of parrots come to feast on nutrient-rich clay, along with macaws, parakeets and other birds. There are blinds off to the side of the clay licks, so visitors can sit and observe the festivities without disturbing the birds, not to mention getting good opportunities for photography and binocular viewing. 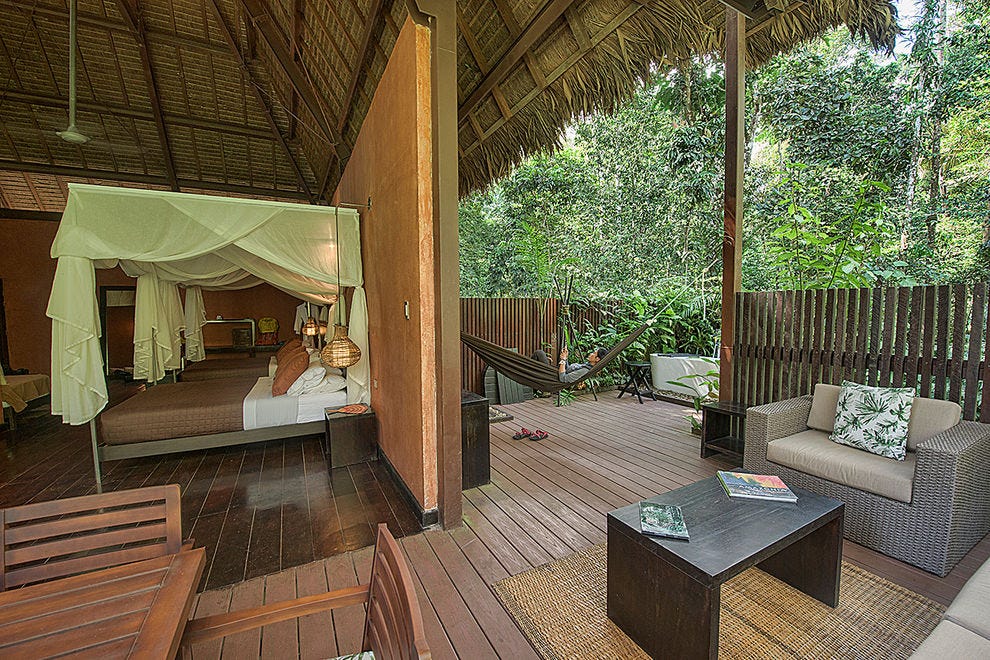 All the trappings of jungle luxury

At the Tambopata Research Center, as at all the Rainforest lodges, rooms feature one wall that is open to the jungle, creating plenty of chances for wildlife viewing and experiencing the forest even while resting.

There are mosquito nets and repellent provided to ensure protection while sleeping or sitting, and some of the rooms even feature jungle jacuzzis to go with the hammocks and other trappings of luxury. It’s a pretty relaxing way to take in the best of what can often be a very harsh environment. 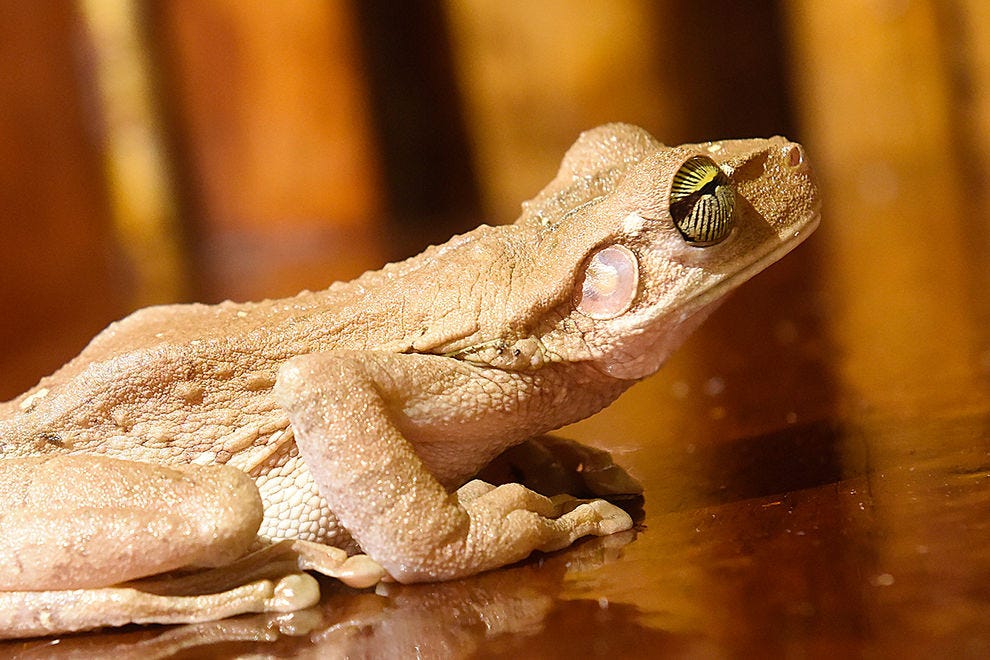 On my last visit to Tambopata, I returned from dinner to find a lovely tree frog perched on my dresser, which led to probably the best close-up photos I had of the entire trip. There was no need either to worry about where he’d run to or hide, or having to sweep him out of the room.

I merely climbed into my mosquito-netted bed and let the frog head back out to the jungle. Naturally, he was gone by morning, and I never saw him again. 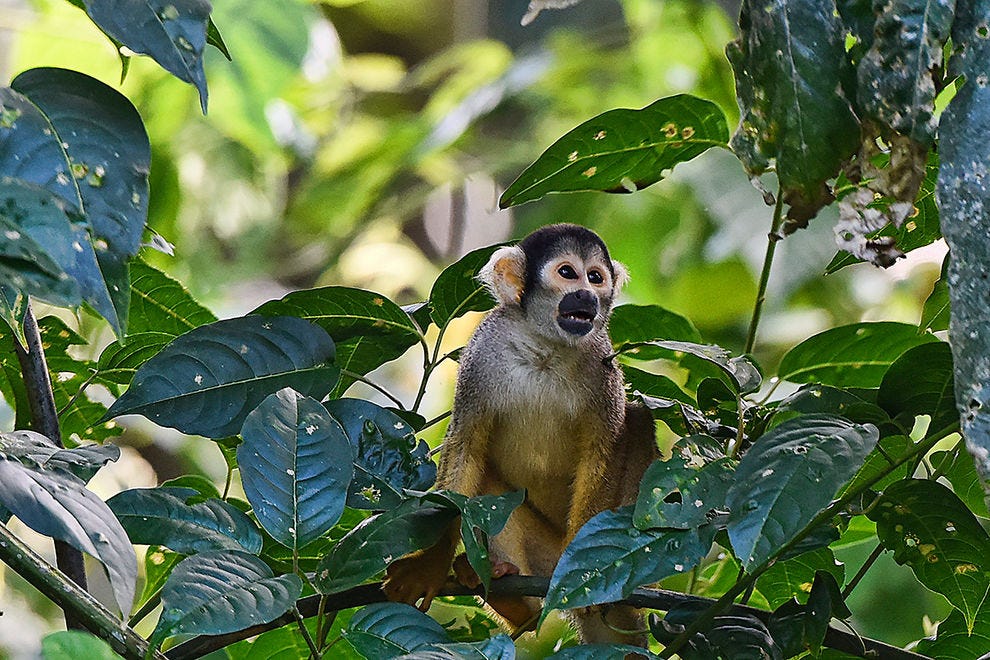 As the Tambopata Research Center is right in the middle of the protected reserve, there are abundant monkeys in close proximity to the property, with Bolivian squirrel monkeys often seen in the fruit trees.

Other species that can be seen include the saddleback tamarin, Toppin’s titi monkey, capuchins, howler monkeys, black-faced spider monkeys and the tiny night monkey, occasionally seen on night walks. 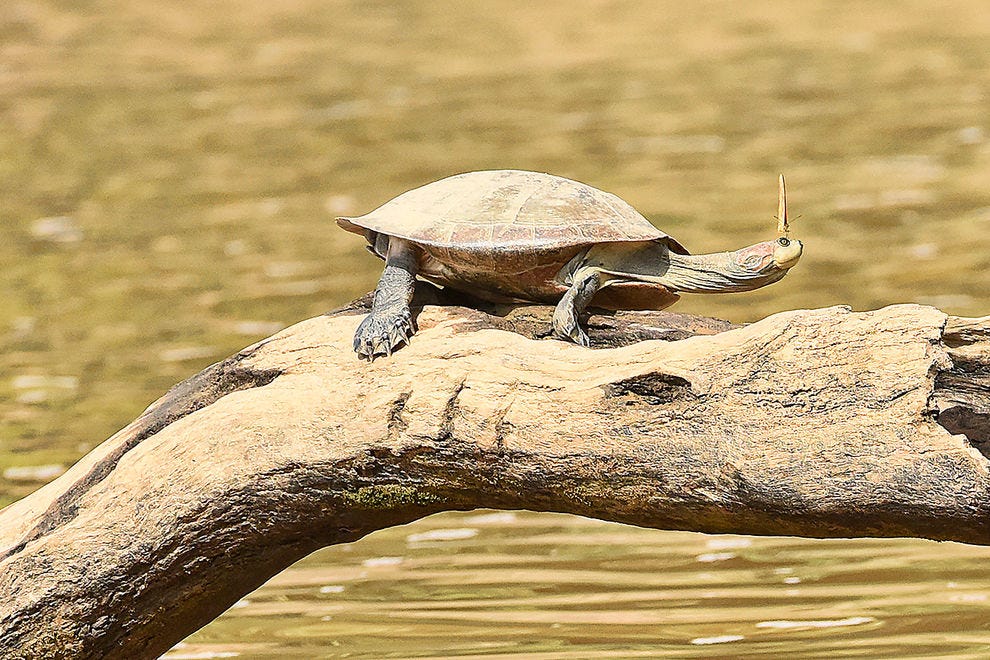 Out on the water, you also get to see an abundance of wildlife. Amazon river turtles may be small, but they are easy to spot. Yellow-spotted side-necked turtles often sit on branches or logs jutting out of the water, sunning themselves, while butterflies flutter down to sit on top of them!

The turtles choose the logs and branches as perfect spots for warming themselves in the sun, as well as being easy escapes. If they feel threatened, they can just drop straight into the river. 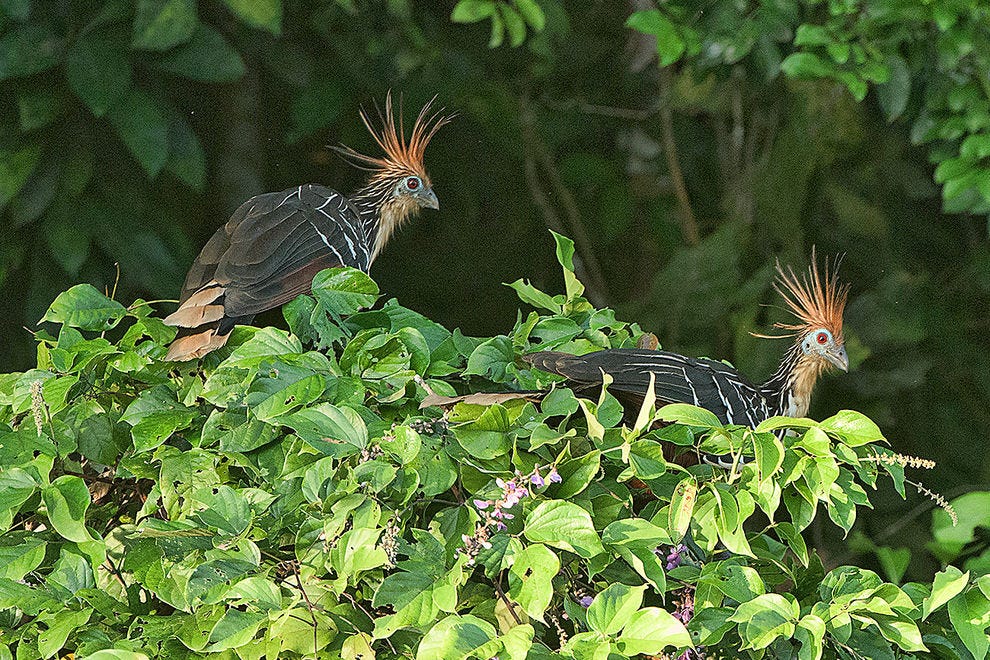 There are over 600 species of birds in the Tambopata Reserve and along the river, thus they feature prominently in any wildlife visit.

While macaws and parrots frequent the clay licks, the clumsy hoatzin, which looks somewhat like a turkey with a mohawk, spends its time foraging in the bushes and trees next to the series of oxbow lakes that are found near the lodges, especially at Posada Amazonas.

You’ll only find the hoatzin in the Amazon, and it is easy to spot due to 1) the fact that it doesn’t fly very well, and 2) you can usually smell it before you see it, as its natural odor has earned it the nickname of “stinkbird!” 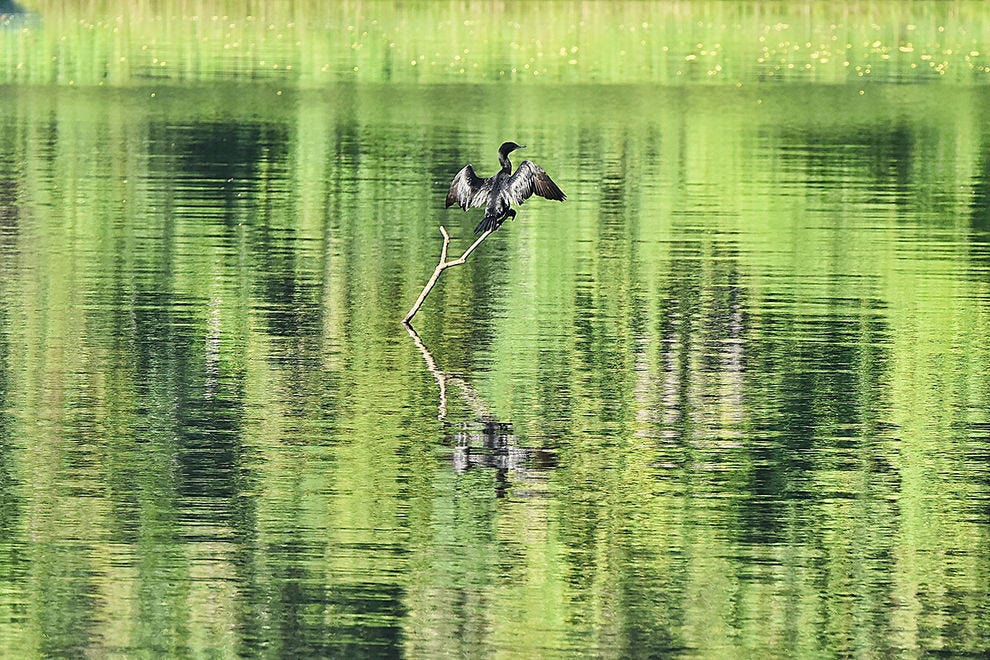 Neotropic cormorant sunning itself on the lake

The oxbow lakes are found just a short hike from the river. They make perfect viewing points for birds and other wildlife, as there are no obstructions in the middle of the lake to block one’s view.

Cormorants sit sunning themselves with their wings spread, while giant river otters, which are highly endangered, can also be spotted here swimming near the banks in the early morning. Large caimans lurk just beneath the surface of the calm lakes. 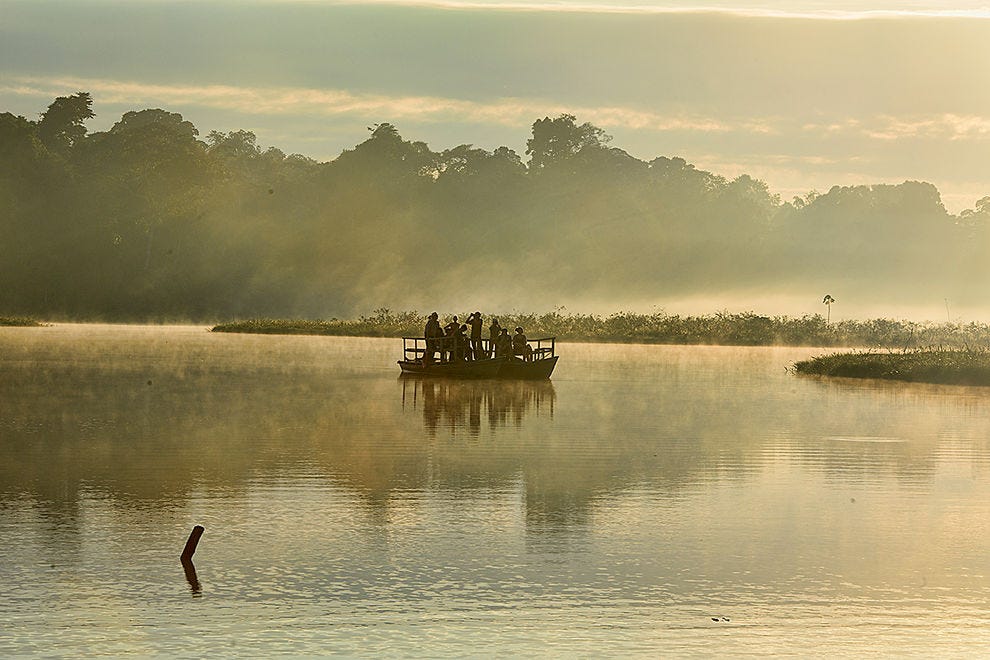 Riding a slow raft is a great way to spot wildlife

Travelling by slow raft is the best way for taking in the lakes, moving leisurely and quietly so as not to disturb the wildlife. It’s also the perfect way to enjoy the early morning mist that burns off the lakes, as well as checking out sunset colors and reflections in the afternoon.

The oxbow lakes are just another wonderful environment to add to the jungle and river experiences that make up the Tambopata Reserve and surroundings. 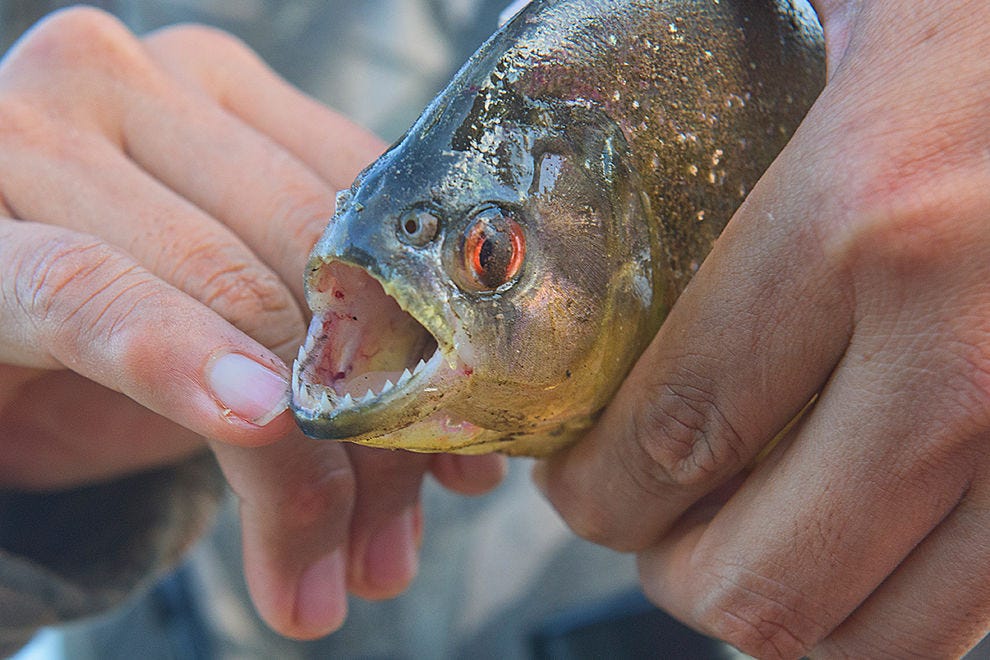 The sharp teeth of a yellow-bellied piranha

One creature that every visitor to the Amazon wants to see (although maybe not too close up!) is the piranha. Actually, the real-life piranha is nowhere near the fierce predator of Hollywood movie legend. Yes, they do have sharp teeth, but they mostly don’t travel in packs looking for human lunch.

At the Tres Chimbadas Lake, near Posada Amazonas, you’re outside of the protected reserve, so it’s even possible to go piranha fishing on the lake and check out the yellow-bellied piranha (the main species found here) up close. 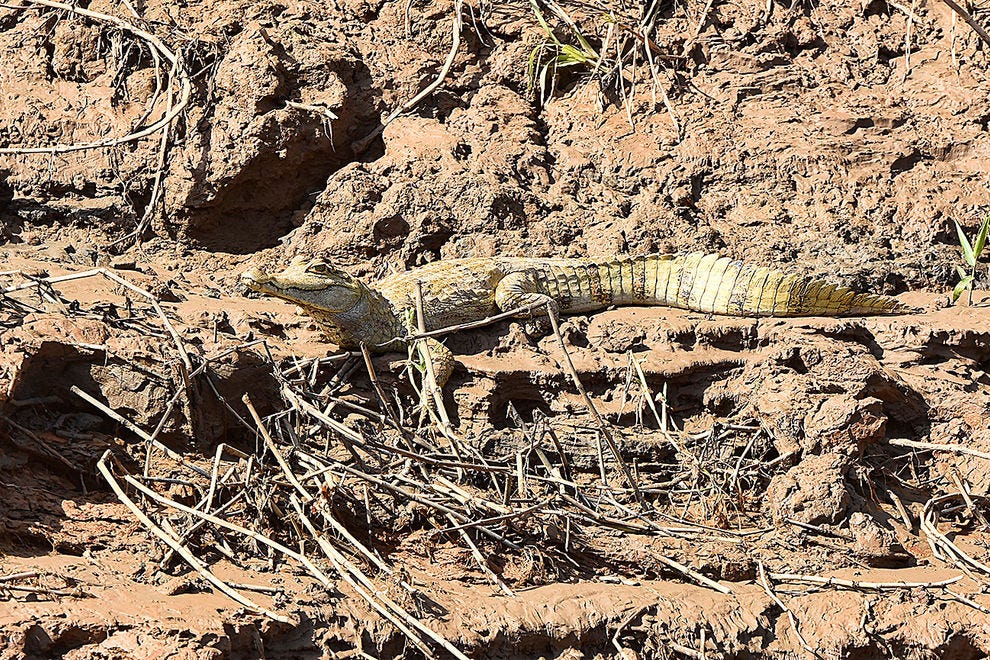 While large caimans are found in the oxbow lakes, along the edges of the Tambopata River, you’ll find smaller spectacled caimans sitting in the sun on the muddy banks. You can also spot smooth-fronted caiman and even the tiny dwarf caiman if you’re lucky.

As the caimans are frequently on the river banks, almost any boat ride up the river will produce sightings. 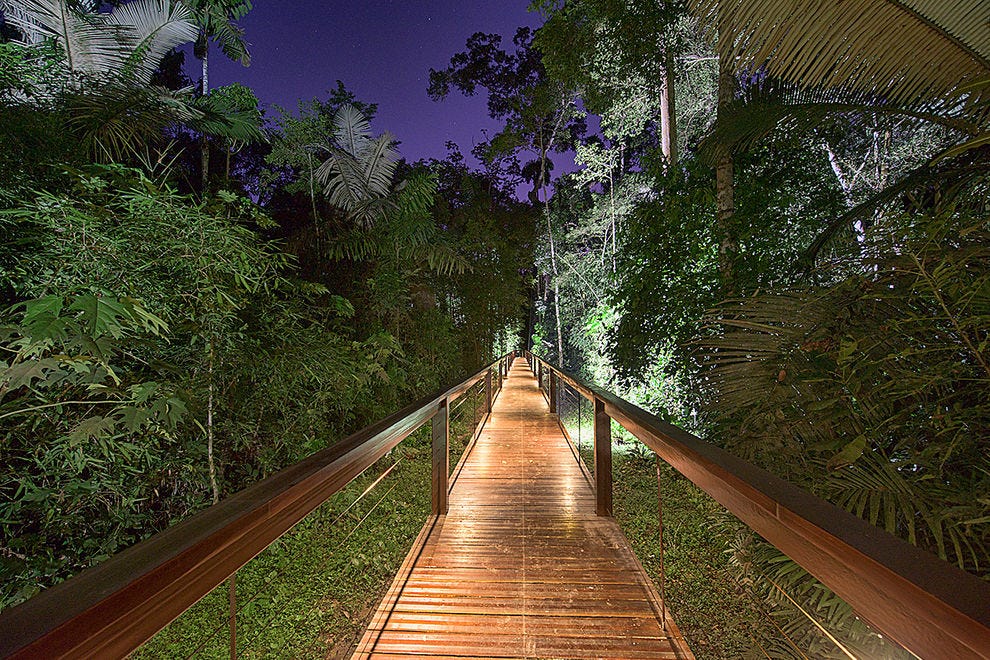 Lit boardwalks in the rainforest, perfect for night viewing

At the Tambopata Research Center, raised wooden boardwalks run through the eco-lodge and are lit up at night. They allow you to look out at the jungle, spot wildlife and not have to worry about some of the more common visitors found along the jungle floor, such as scorpions, snakes and tarantulas.

Additionally, trained guides also run nocturnal walks, allowing you to spot some of these creatures in the presence of locals who have plenty of experience and knowledge dealing with them. 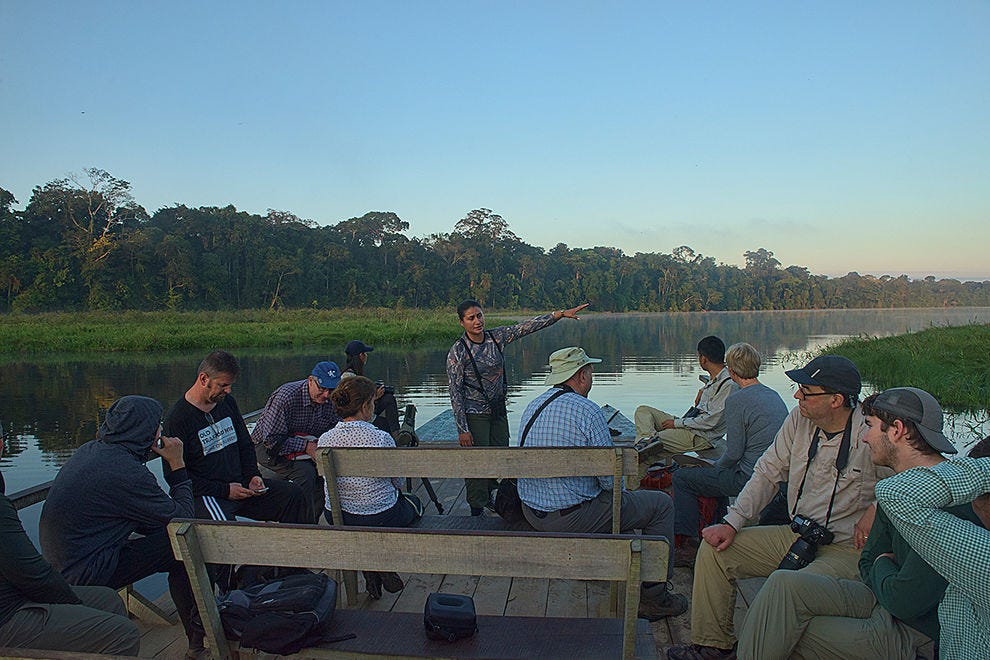 Wildlife guide looking for river otters on the lake

Guides at all of the Rainforest Expeditions lodges are well-versed. In fact, at Posada Amazonas, many come from the local Ese Eja indigenous community and have grown up in the jungle, and know its plants, animals and features intimately.

Guides carry powerful binoculars and scopes for viewing, and can even take photos through the scopes with your mobile phones. This makes for some great closeups of often hard-to-see or shy creatures, such as the giant river otters or some of the birds like toucans, often only observed in the tree tops. 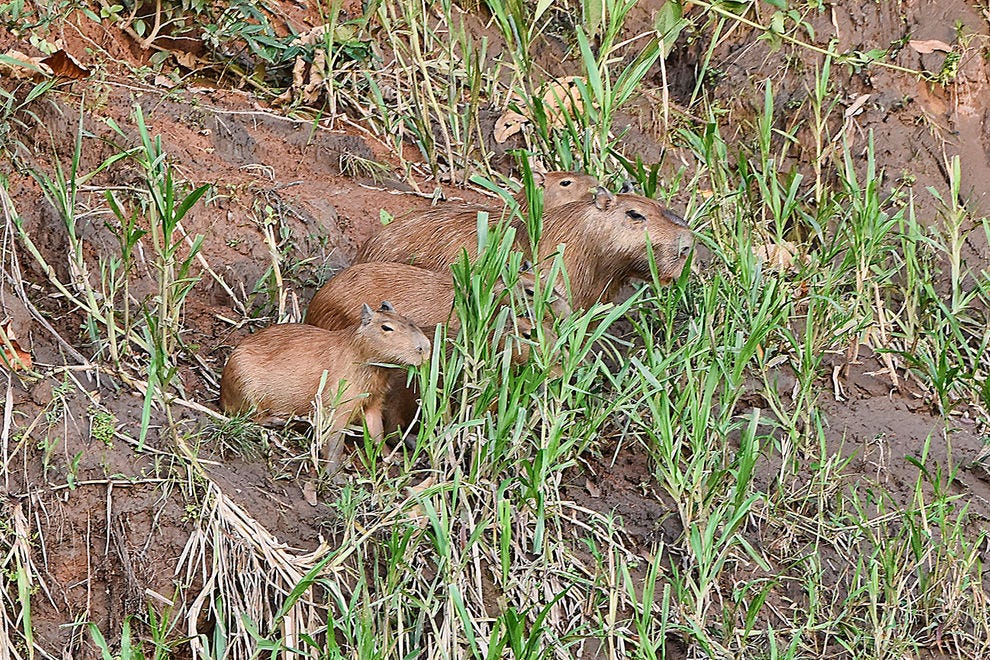 One thing is certain on any trip to the Tambopata River, you’re sure to see wildlife you’ve never seen before, and perhaps not even heard of. Capybaras are often spotted along the river’s edge, and while they might resemble a small pig, they are actually the largest rodent in the world, sometimes weighing up to 200 pounds!

They have webbed feet which allow them to swim, and they even sleep in the water, completely submerged except for their noses. 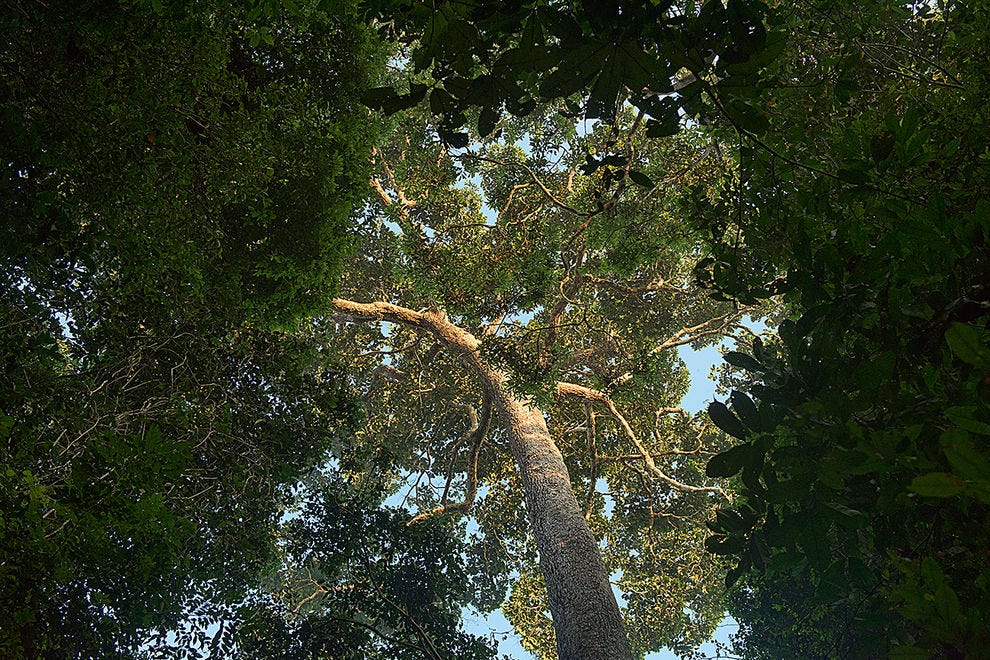 Looking up through the jungle at a giant Brazil nut tree

On any trip here, you’ll be able to see the jungle from above, via the canopy towers, or from the river, on a boat or perhaps on an oxbow lake on a raft. You’ll also get a view from below, such as getting glimpses from the forest floor up to the tops of the amazing trees.

Be careful when looking up at Brazil nut trees though, as when the nuts are fruiting, they can be deadly. Each year, a decent number of people are killed by falling fruits, which are extremely heavy. 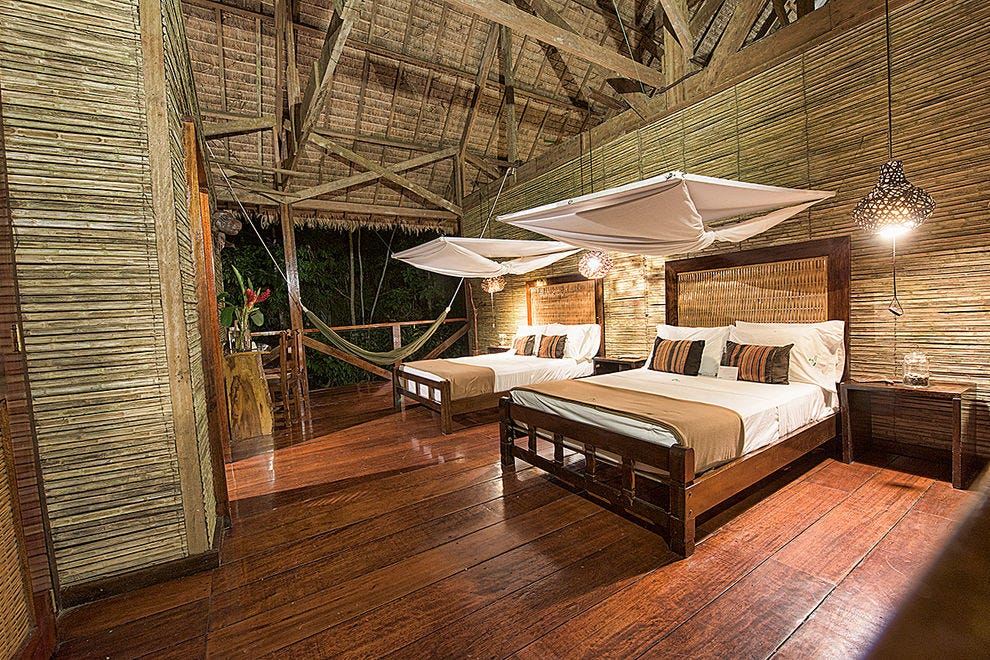 And when the jungle gets to be a bit too hot and humid, or the bugs come out, you can always retreat to the Peruvian Amazon’s best haven, with the comfy rooms at all of Rainforest Expedition’s lodges being the perfect respite from the elements and busy schedule outside. 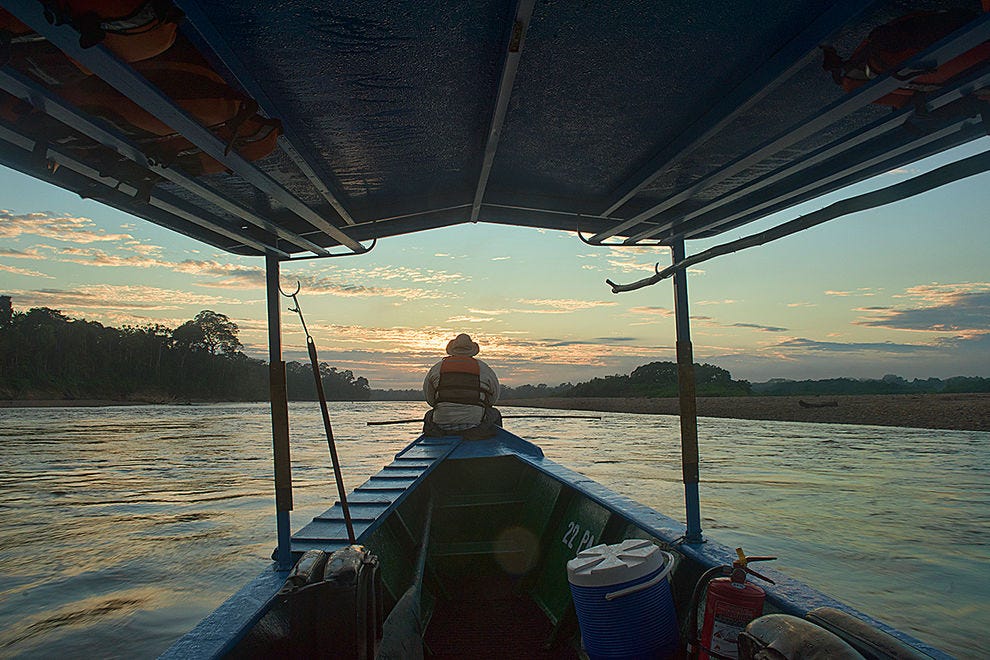 Navigating the Tambopata River at sunrise

The Tambopata River and Reserve is a great place to escape to a world of incredible natural beauty, see some of the Amazon’s best wildlife and enjoy comfortable lodges while being assisted by expert guides. Put it on your must-visit list now.

Amazing things to do in New Orleans, from jazz concerts to Mardi Gras
Wuhan coronavirus: Is it safe to travel?
NTSB launches investigation into helicopter crash that killed Kobe Bryant, 8 others
Inside one of the world’s newest (and wettest!) national parks
The best budget hotels in Bruges, from historic houses to modern apartments