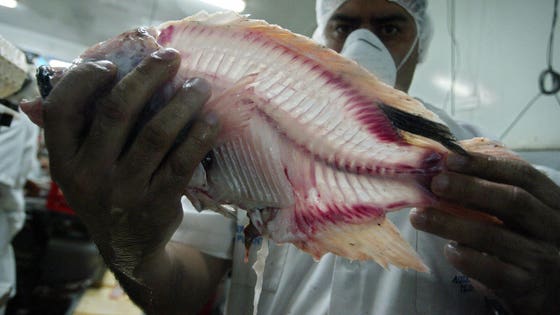 In a new study entitled “Tilapia-waste flour as a natural nutritional replacer for bread: A consumer perspective” by Monteiro et al., six breads formulated with different percentages of nile tilapia flour were analyzed to assess taste and nutritional merits. The study found that tilapia flour can be added to bread at 12.17% before it is rejected by consumers for tasting too fishy. 5% tilapia flour was found to be the ideal percentage for both nutritional benefits and consumer taste preference.

Processed bread has faced an onslaught of consumer rejection in recent years. High in carbohydrates, generally low in protein and high on the Glycemic Index, bread causes a spike in blood sugar levels that doesn’t serve diabetics well. Studies have shown that bread nutrition can be improved with the addition of fish protein. The main concern with the addition of fish protein is that people may not want to eat fishy bread!

When tilapia are harvested, fillets are removed, processed and sold. The rest of the fish, including the skin that is adhered to bone, is not marketable and is considered waste. About 70% of the live weight of the fish is wasted. For this reason, tilapia waste is an ingredient just begging to be put to good use. Researchers wanted to know just how much tilapia they could sneak into bread before study participants push away the plate.

The fish was dried and powdered for the experiment, before being stirred into the mix with traditional wheat flour in different proportions. Breads were formulated with 0%, 2.5%, 5%, 10%, 15% and 20% tilapia-flour.

The study found that substituting wheat flour with some tilapia flour resulted in increased lipid, protein and ash content, and decreased both carbohydrate levels and amount of dietary fiber in bread.

To assess consumer taste, study participants were asked to check all that apply for 12 sensory characteristics for each bread type: cream color, airy appearance, moist, crumbly, salty taste, hard, raw, acid taste, sticky in the teeth, cheese flavor, oil, and cheese aroma. Participants seemed to prefer bread with lower percentages (0-5%) of tilapia flour the most. The 20% tilapia flour bread was the least enjoyed. The fishy taste from tilapia flour is due to fatty acids and sulfur compounds in the fish. Findings showed that replacement of wheat flour with tilapia flour up to 10% would not impact sensory characteristics of the bread or have detrimental effects on overall liking.

You may start to see fish-waste flour as an ingredient on bread labels. Consumers are interested in nutritious, protein-enriched foods. Additionally, there is new interest in utilizing what would have once become food waste. According to the United States Department of Agriculture, between 30 and 40% of food supply in the U.S. is wasted. Not only is a large percentage of our food ending up in landfills, but the energy, water and other natural resources used to make that food is wasted as well. Ugly fruits and vegetables have been getting attention lately as people sign up to receive boxes of unattractive produce to offset this waste. The seafood industry gets less attention, but is not immune to the waste. Normalizing the use of fish-waste flour is one way to divert precious resources from ending up as trash.

Where to stay in Bangkok: A neighbourhood guide to the city’s best hotels
The most amazing things to do in and around Cape Town
10 British hotels with amazing breakfasts worth getting out of bed for
The Overnight: What to do in Seattle if you’re there on a business trip
Love and legend on the most romantic island in Wales